Yesterday, I may have mentioned that my walls are nice people. Since they really are good folk, I decided to give them some tattoos, cause who doesn't want ink, amiright?
Behold my walls new ink 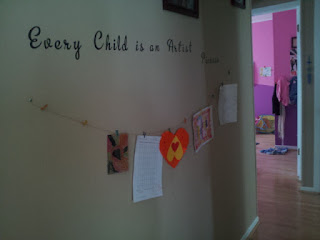 That one says, "Every Child is an Artist." Picasso. 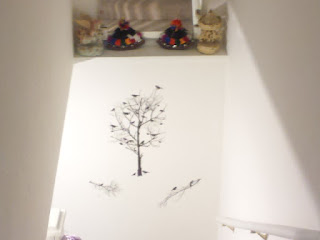 That is a tree full of birds, because who doesn't want to think about having birds attack you on the way down to a dark, and scary basement that also doubles as a playroom for my messy as hell kids? I know I do!

I love doing this kind of thing when the husband is at work.

He comes home, throws all his crap down and starts walking to his office.
I, meanwhile am sitting innocently on the couch, just waiting for it.
There is the sounds of  typing, paper shuffling, a sigh.
Footsteps back into the living room.
"Soooo, when did we get money for all this, and really? Every Child is an Artist? Really?"
Innocent stare from me.
Sigh from him.
Steps back into the office.

I like to spice shit up for him. Also, we have had this stuff lying around here for years, I just never did anything with it, so :P

Also, I finally got some sleep last night! This calls for an UBER Awesome.